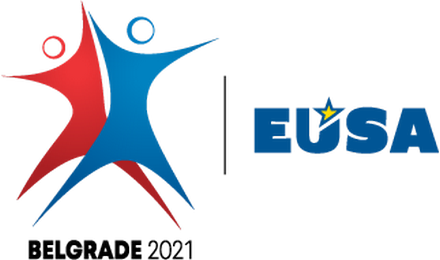 European Universities Games Belgrade will not take place in 2021

We would like to inform you that the 5th European Universities Games will not be held in Belgrade this year.

When the decision was made in March not to hold the Games from July 14 to 27, 2021, as originally planned, the European University Sports Association (EUSA) and the Local Organizing Committee, together with the Government of the Republic of Serbia, made great efforts to find an adequate solution to hold the competition later this year. However, due to the unstable and unpredictable epidemiological situation, which affected the whole world, the decision was made to cancel the Games for the current year.

”We explored the option of hosting the competition in the autumn of 2021, yet taking into account the unstable situation which might hinder the Games being organized under the traditionally cultural and social atmosphere associated with EUSA events, a decision has now been made not to have the event this year. EUSA acknowledges the decision not to have the Games in Belgrade this year is in the best interests of all concerned, keeping the safety and well-being of the participants, officials, volunteers as well as the hosting country citizens as a priority.”

We remind you that the Games were initially scheduled for July 2020, but due to the appearance of coronavirus, the competition has been postponed to 2021.

European University Sports Association, Local Organizing Committee, and the Government of the Republic of Serbia continue to consider the option of holding the Games in Belgrade later and getting a new date.